Tibetan Medicine is an ancient system of medicine that has many similarities with other Asian medical systems: Chinese, Ayurvedic, and Unani. Over the centuries, it has developed into a highly complex medical science with intricate theories of disease causation, diagnosis and therapeutics. 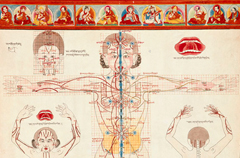 The medical system itself is founded on the principle that the human being and the surrounding environment are composed of the same basic five elements: traditionally designated as earth, fire, water, wind and space. These may be interpreted as matter, energy, bonding, movement and space. This enables the components of the world at large to be used, by the physician, to restore the patient to health as both are of similar nature. The individual is a part of a greater whole.

One major factor believed to trigger disease is the interaction between the person and the world in which (s)he lives - diet, human relationships and climate being typical areas of interaction. Another factor is the influence of the individual's own mind, feelings and personal history. These factors affect the body and mind in multiple ways, grouped by Tibetan Medicine into three major areas of pathology, known as the nyes pa gsum. Each of these three areas includes functions of the body's major sub-systems, such as the cardiovascular system and digestive system. Each nyes pa is also related to the psychological makeup and welfare of the individual. The importance of compassion in healing is stressed in Tibetan Medicine.

Diagnosis is principally based upon a complex analysis involving palpation of the ulnar and radial pulses, examination of urine and in-depth questioning: through visual inspection, palpation of the ulnar and radial pulses to ascertain the state of the solid and hollow organs of the body; in depth questioning to establish predisposing and precipitating causes of imbalance and inspection of the patient's urine is also used at certain times.