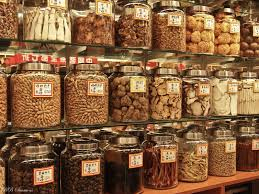 Chinese herbal medicine is one modality within a broad tradition, known as traditional Chinese medicine (TCM) that also includes acupuncture, massage (tuina), breathing exercises (qi gong) and dietary therapy. It has evolved over three millennia and today is practised throughout much of South-East Asia. It is state sponsored in hospitals throughout China, where it enjoys equal status and a pragmatic working relationship with orthodox western medicine. Having developed over thousands of years, Chinese medicine has evolved many approaches to diagnosis and treatment yet there is also a strong continuity, with an unbroken written record going back to the third century BCE. Famous texts from the Chinese tradition include the Yellow Emperor's Inner Classic (Huang Di Nei Jing) compiled between 200 BCE and 100 CE and the Divine Husbandman's Classic of the Materia Medica (Shen Nong Ben Cao Jing) from the later Han dynasty (25-220 CE). The Discussion of Cold-induced Disorders (Shang han lun), written about 220 CE by one of China's most renowned herbal doctors, Zhang Zhong Jing, outlines the treatment of various conditions arising from exterior causes. Several of its formulas are still in use today. Sun Si Miao (581-682 CE), another famous physician and scholar who was versed in both Buddhist and Daoist philosophies, devised in his Thousand Ducat Formulas (Qian Jin Yao Fang) and his Supplement to the Thousand Ducat Formulas (Qian Jin Yi Fang) an extensive repertory of prescriptions that similarly influence Chinese herbal practice to the present day.

The Materia Medica Arranged According to Drug Descriptions and Technical Aspects (Ben Cao Gang Mu) by Li Shi Zhen published in 1596 was the outcome of 40 years work by the author. His book contains 52 chapters describing 1893 medicinal substances. Among other things, Li Shi Zhen demonstrated the connection between sweets and tooth decay and described occupational illnesses such as lead poisoning. In the late Ming and Qing dynasties, new theories concerning the treatment of disease were developed by five famous doctors, Wu You Ke, Ye Tian Shi, Xue Sheng Bai, Wu Ju Tong and Wang Meng Ying. All these physicians were adherents of the "Warm diseases Theory" (Wen Bing Xue) that addressed the treatment of rapidly transmitted infectious disease. In modern times, Chinese herbal medicine continues to develop as part of Traditional Chinese Medicine alongside conventional western medicine. After taking power in 1949, the Communist Party encouraged the use of Chinese herbs as a cost-effective alternative to expensive western drugs and continued to publish materia medica. For example, in 1977 the Encyclopaedia of Traditional Chinese Medicinal Substances (Zhong Yao Da Zi Dian) representing 25 years of research was published by the Jiangsu College of New Medicine. This monumental work contained 5,767 entries, a compilation of China's herbal tradition to that time.

Based on centuries of clinical experience, Chinese herbal medicine has developed practical and effective treatments that are highly effective for many of today's ills. These theraputic strategies are underpinned by a set of core concepts about health and disease that are shared by practitioners of TCM around the world. In the UK, Chinese herbal medicine is a relativenewcomer, having developed rather later than acupuncture. However, it has grown rapidly in popularity in recent years.

Some effort has gone into understanding the pharmacology of Chinese herbal medicine. But the language of Chinese herbal medicine diagnosis and treatment is quite distinct from that of modern biomedicine, and direct translation from one to the other is not particularly illuminating or meaningful. In the very broadest terms, good health is a state in which a person has optimum vitality (based on adequate supply of Qi and Blood and a healthy balance of Yin nourishment and Yang function), where the various functions needed to maintain that vitality are unimpeded. Ill health is perceived as arising from a loss of that vitality or by some form of impediment to those functions, or both. Precise diagnosis of a patient's illness is achieved by analysis of the presenting symptoms and signs as well as by taking account of dietary and lifestyle factors and evaluating the past medical and family history of the patient. The physician pays special attention to the pulse and tongue in evaluating the patient's condition. The diagnosis identifies the presenting pattern of disharmony expressed in TCM terms (e.g. Kidney Yang Deficient, Heart Fire Blazing, Invasion of Pathogenic Wind-Heat etc.).

These pathogenic patterns may relate to dysfunctions of Organs (understood as spheres of function rather than in an anatomical sense), or to the presence of pathogenic factors or to a number of other features such as phlegm or blood stasis. The patient's condition may be recognised as an identifiable traditional TCM condition (e.g. Bi - "blockage"- syndrome roughly corresponding to arthritis in western medicine) or further categorised as an excess or deficiency, external or internal, hot or cold condition. In the final analysis all health problems are seen as an imbalance of the two universal polarities, Yin and Yang and may also be expressed in terms of Five-Element imbalance. This is a complex process demanding acute powers of observation and analysis on the part of the practitioner.

The Chinese materia medica contains several hundreds of plant species, together with some non-plant ingredients. These are classified according to their 'temperature', flavour, and direction of movement, properties that are related to their ability, in numerous different ways, to supplement energy or clear impediments to function. The art of treatment with Chinese herbal medicine is to choose a formula (a combination of herbs), which matches and redresses the pattern of disharmony of the individual, and to modify the formula in order to accommodate changes occurring in the course of treatment. This allows for considerable therapeutic flexibility, matching the prescription to the needs of the patient throughout a course of treatment. Chinese herbal prescriptions usually comprise a mixture of herbs, each herb playing a specific and significant role to achieve the desired therapeutic effect. Over many centuries, generations of Chinese herbal practitioners have understood and utilised the beneficial synergistic effect obtained by the skilful combining of medicinal herbs and many famous ancient formulae are still in regular clinical use.